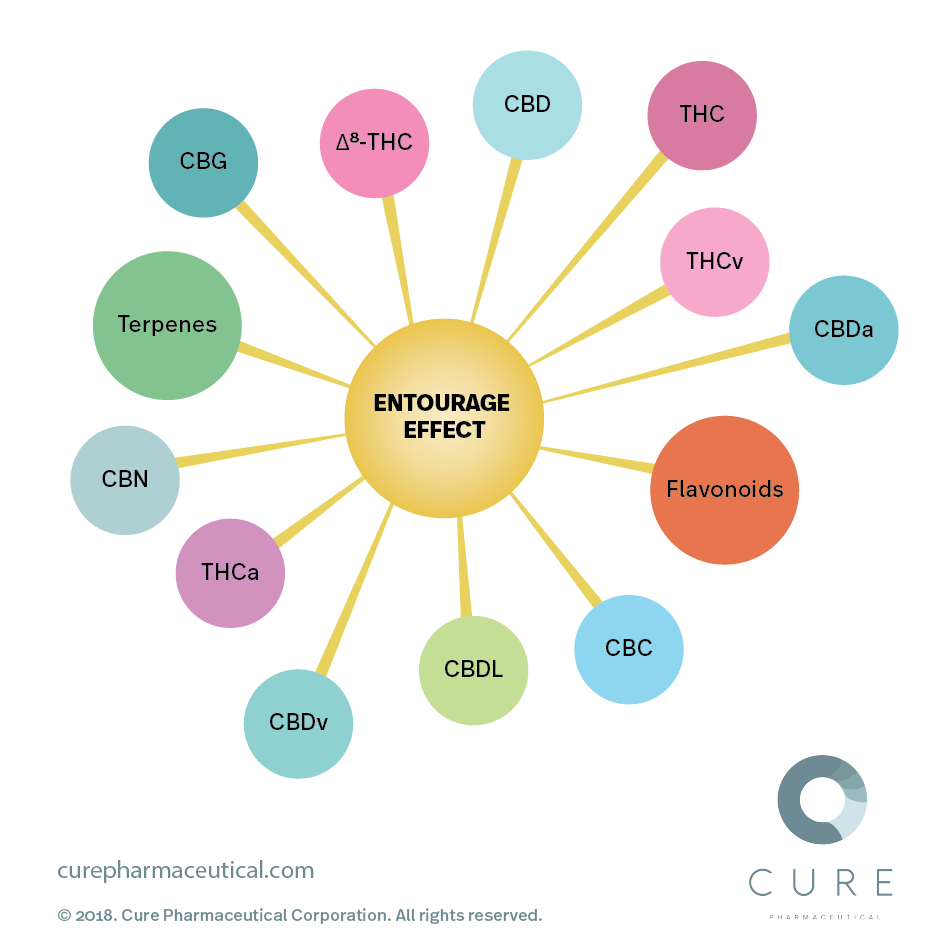 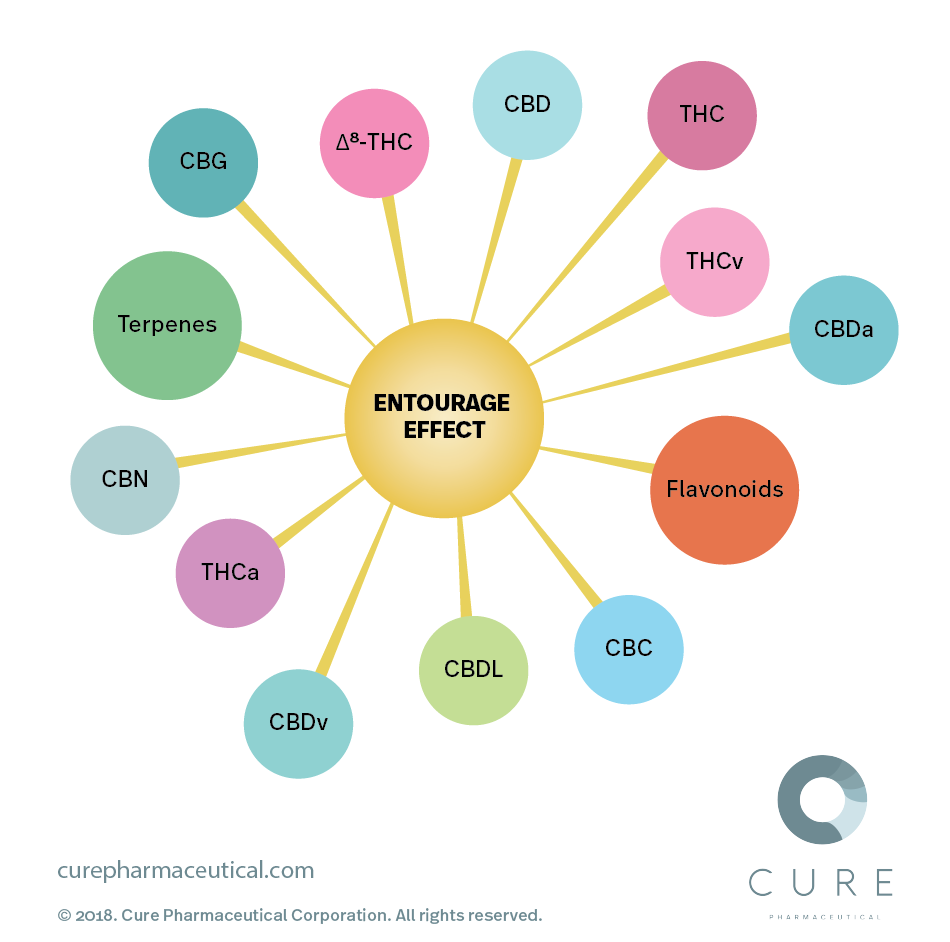 THC and CBD are the most widely researched cannabinoids in cannabis science. However, the reality is that both compounds are only part of the story. THC and CBD, along with at least other 113 other cannabinoids, operate in sync with hundreds of other compounds to modulate cannabis’s psychotropic and therapeutic effects when consumed and ultimately give cannabis its versatility in providing relief for a multitude of medical ailments.

“The whole is greater than the sum of its parts.”- Aristotle The term “entourage effect” refers to the concept that all these components of the cannabis plant work together in concert to exert a therapeutic effect greater than any single compound by itself.

How is this possible? Cannabis is a complex plant with over 400 molecules and compounds, including cannabinoids, terpenes, flavonoids and other phytochemicals, each of which is thought to affect the brain and body in a different way. These elements interact synergistically to produce and amplify the overall therapeutic benefits of cannabis. The term “entourage effect” refers to this phenomenon with results that make the whole plant more beneficial than the sum of its individual molecules.

This notion that the compounds present in cannabis work in concert to produce stronger benefits than they would separately was first introduced in 1998 by scientists Shimon Ben-Shabat and Raphael Mechoulam. The scientists were the first to establish that it is the synergistic relationship between these compounds that is largely responsible for the therapeutic effects of cannabis.

Expanding on this in a 2009 paper “Synergy research: Approaching a new generation of phytopharmaceuticals,” scientists Hildebert Wagner and Gudrun Ulrich-Merzenich outlined and discussed the following basic mechanisms of the entourage effect:

From this research, it’s clear that the entourage effect supports the idea that whole plant medicine is superior to single isolated molecules.

“…synergism may play a role in the widely held (but not experimentally based) view that in some cases plants are better drugs than the natural products isolated from them.” – Ethan Russo, M.D.

Ethan Russo, M.D., a neurologist and former medical advisor at GW Pharmaceuticals who now serves as director of research and development at the International Cannabis and Cannabinoids Institute, published an article in the British Journal of Pharmacology in 2011, in which he details how cannabis compounds influence each other’s mechanisms. The article, “Taming THC: potential cannabis synergy and phytocannabinoid-terpenoid entourage effects,” was one of the first to examine how the entourage effect works when cannabis is administered to mammals.

Russo found that terpenes – the fragrant plant oils that give cannabis its smell – are quite potent on their own, and provide a broad range of effects, including sedative, anti-bacterial, anti-inflammatory and palliative therapy. However, he also uncovered how terpenes seem to change the way in which cannabinoids bind to their respective receptors, thus altering the way in which cannabinoids take effect internally.

WHAT DOES THIS MEAN FOR CANNABIS-BASED THERAPIES? 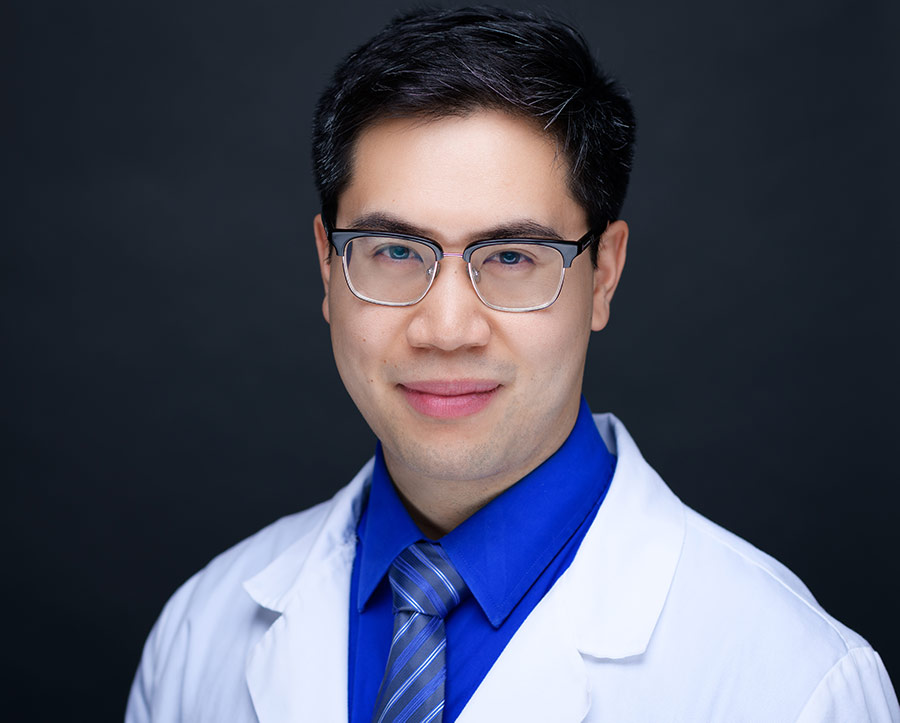 We sat down with David Nguyen, M.D. a clinical investigator at WTTC Global, and an advocate for cannabis-based therapy and chatted with him about his thoughts on cannabinoids, the entourage effect and the industry at large.

Reflecting on this effect in conjunction with the current lack of an established standard of care in cannabis, Nguyen said it could be viewed as a positive opportunity for ownership of self-care.

“It empowers the patient. It gives the patient ownership over their own care since the patient can choose,” Nguyen says. “They can choose their product and select their preferred method of delivery – sublingual is an option, vaping another, and so on. They are able to medicate with as much or as little as they need because it is a very safe therapy – much safer than opioids.”

Acknowledging that there is not currently a way to properly recommend exact dosage, he says it is incumbent upon patients to monitor their results and the product, dosage and delivery method that caused the effect. When he recommends cannabis therapy, he says, “I start with what they (the patient) are comfortable with in terms of THC or CBD content, and a delivery method. Then I caution them – typically with THC products because of the mental effect that needs to be taken into account. Then I orient them to what with what’s available, what to expect when they start their therapy and to adjust accordingly.”

The entourage effect suggests that unlike other drugs that work best as single compounds, cannabis likely offers the most benefit as a whole plant. However, despite studies done in the past, the entourage effect is still hotly debated in scientific circles and there is a growing effort to prove its validity. This increased interest reflects changing attitudes across the U.S. about cannabis used for medical therapy.

The recent FDA approval of GW Pharmaceuticals’ Epidiolex for seizure management of patients with Lennox-Gastaut syndrome and Dravet syndrome is another indication of the growing acceptance of cannabis-based therapies. Check out this blog post for more on this.

There is much left to be uncovered in the potential of the cannabis plant. Studying the entourage effect will be key to furthering our understanding of how the components of cannabis all work in concert together. This could lead to the development of innovative cannabis-based therapies tailored directly to specific patient needs and will revolutionize the medical cannabis industry altogether.

This is the second article in a three-part series on cannabinoids. You can read the first post here: “The Role of the Endocannabinoid System in the Human Body.” In the next installment of this series, we will look at current innovation and regulations in pharmaceutical cannabis. 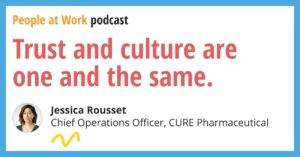 Jessica Rousset on People At Work Podcast: Trust is Culture

People at Work is podcast by Jostle.me and is a series of conversations with individuals leading change to create extraordinary workplaces. The podcast gets real 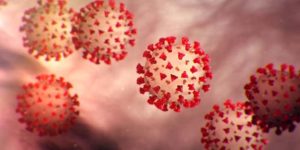 A Note from our CEO regarding Coronavirus Disease 2019 (COVID-19)

To Our Community: The world is facing an extraordinary challenge with the spread of COVID-19. Like you, we’re deeply concerned and will do what we can to help keep our teams, communities, and families safe and healthy.  We’re closely monitoring the spread of the virus and how it may affect our employees and business operations. […]