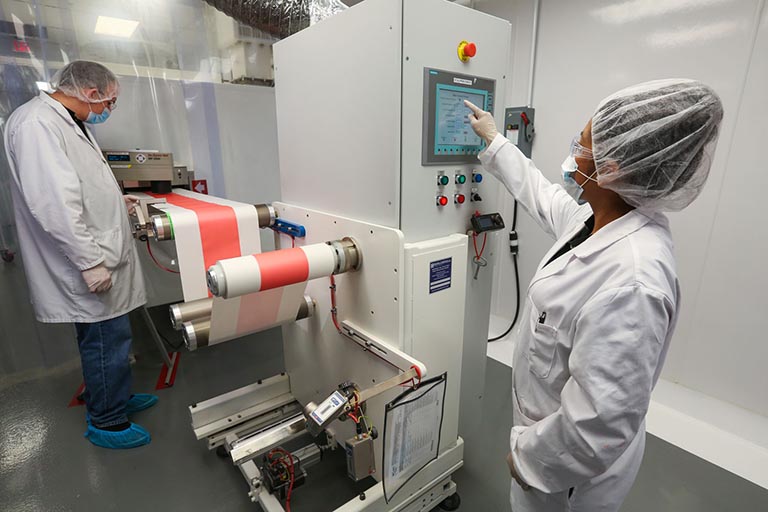 In the late 1970s, rapid disintegrating drug delivery systems were developed as an alternative to capsules, tablets and syrups for patients with problems swallowing – a large swath of the population estimated to be between 30-40% (1). Oral films represented a later advance, using water dissolving polymers that release the medication into the oral cavity. Early oral films had a many limitations, such as dosing limited to 30% w/w of medication, combining multiple actives ingredients and poor stability.

One of the earliest pharmaceutical oral films on the market was the Chloraseptic® relief strips for the treatment of sore throat which delivering a low dose of benzocaine. Shortly after the introduction of Chloraseptic oral film in early 2003, other oral films entered the market but were plagued by stability and packaging problems. Over the last decade the science behind oral films has advanced significantly with improved methods for testing the purity, potency and uniformity of films, leading to greater investments and commercial viability.  There are now a handful of prescription films on the market for the treatment of Alzheimer’s, Parkinson’s tremors, chemo and radiotherapy induced nausea and vomiting, opioid dependence and pain.

In addition to providing an alternative for populations that have trouble swallowing, oral films can impact a drug’s therapeutic index by increasing effectiveness and reducing side effects. Depending on where the film is placed within the oral cavity – on or under the tongue or against the cheek – release of the drug will differ. When placed against the cheek or under the tongue, contact with saliva or buccal mucosa initiates direct absorption of the drug into the vasculature, avoiding its degradation in the acidic environment of the stomach, gut-wall elimination and hepatic elimination. Drugs administered p.o. that cause significant gastrointestinal side effects can benefit from being formulated as buccal films. Drugs that are pH sensitive may benefit from buccal delivery using oral film.

Drug dissolution is an important parameter affecting adsorption. When placed on the tongue and swallowed, the oral film can be made to disintegrate rapidly, releasing the medication that has been solubilized within the matrix. For extended and intestinal release, encapsulating the drug within the film will protect it from low stomach pH. Oral films present significant advantages for delivering Biopharmaceutical Classification System (BCS) type II drugs – high permeability, low solubility.

As with any dosage form, oral film presents certain limitations. For example, films cannot currently deliver doses in the gram range while retaining their rapid release properties and remaining palatable. For lower potency drugs, multiple units of film can be taken to deliver the target dose, which is a feasible solution given the ease in which oral film is administered. While buccal delivery holds potential for macromolecules, small molecules have been the focus for oral film. Various challenges relating to the excipients and the manufacturing method used will need to be overcome to be commercially viable. (2)

With the polymer systems typically used, oral films are generally hygroscopic in nature. Therefore, drugs that are susceptible to hydrolysis such as acetylsalicylic acid are not good candidates for oral film. The moisture content in the film can be controlled with appropriate packaging. Encapsulation methods can be used to protect from heat degradation which may occur during the manufacturing process.

The design of a thin film formulation is driven by the target product and drug release profile. The primary component of an oral film is the polymer blend or binder. Its selection should be guided by the desired strength and stability of the film as well as mucoadhesiveness, pliability, dissolution rate and moisture content. Plasticizers such as glycerol are used to improve elasticity of the film which can be important for manufacturing scale up. Plasticizers also play a role when combined with certain polymers in the overall dissolution rate of the film. Some films may need to dissolve over a period of hours and others within in seconds depending on the indication. Surfactants are used as wetting, dispersing and solubilizing agents for rapid release of the drug in the mouth. Lipids may be used for stabilizing hydrophobic drugs. For buccal films, permeation enhancers should be considered as well as multilayer films with an occlusive layer that prevents the released drug from being swallowed. Of course, sweeteners, flavorings, bitter blockers and coloring agents are important for the patient experience.

For most manufacturing methods, solvents play an important role in film formulation for solubility of the molecule with in the film forming matrix. Solvents are chosen based on the drug’s solubility. Preferred are volatile class 3 residual solvents such as ethanol and acetone and non-volatile solvents such as water. The order in which the various components are admixed is important to optimize to achieve the desired product specifications.

Scale up and manufacturing considerations

Scale up of oral film production involves migrating from a discontinuous process to a continuous one. Several methods for manufacturing an oral film may be pursued depending on the physico-chemical properties of the active ingredient and the target dose(3), but the most common is solvent casting. Using this method, the manufacturing process starts with dispensing the excipients, active ingredient and solvents in a defined order into a temperature controlled tank and blending them into a slurry, typically using a high shear mixer which ensures a homogenous slurry. However, high shear mixers should not be used with encapsulated drug active as the process will remove the encapsulant. Homogeneity of the slurry should be tested by sampling at different locations in the tank and measuring viscosity and solids content. Depending on the properties of the slurry (i.e. bacteriostatic, bactericidal or growth promoting), in-process bioburden testing may be required. To ensure flexibility of production scheduling, optimal conditions for storing the slurry should be tested.

The slurry is then fed into an oven through a coating station, typically using a pump system. The slurry is applied to a liner using a slot die or knife-over-roll coater, at a determined pin gage. The selection of the liner is an important consideration in the scale up process as it will affect how the solvent, usually water, will evaporate. Relevant parameters when selecting a liner are moisture content of the cast film, the location of the heat source and the directionality and strength of the air flow within the oven. It is generally preferred to “bake” the film rather than “broil” it.

Casting parameters – oven temperature, pin gage and belt speed – required to meet product specifications at the terminal end of the oven, should be optimized to achieve the fastest belt speed for highest throughput and cost efficiencies. Some oven systems enable the operator to control the height and directionality of the air nozzles and offer modular heat zones (e.g. infrared, progressive temperature increase). Oven lengths can range from 10ft to 24ft or more. The film and liner are then packed as master rolls at the terminal end of the oven and should be stored in a temperature and humidity controlled environment as oral films tend to be hygroscopic. Stability of the intermediate master rolls over time should be established by evaluating API content, moisture levels, physical characteristics, pliability and tensile strength. Typically, oral film products are stable at room temperature in an appropriate container closure system. Of note, there is no official method or monograph in the US Pharmacopeia for evaluating oral film properties such as disintegration, dissolution or mucoadhesion.

Figure 1: The film and liner exit the oven and are stored as master rolls, ready to be divided into daughter rolls and further into single doses.

The final step in production is cutting the master roll into daughter rolls and further into single doses which are placed into individual pouches or sachets by converting and packaging machines. The API dose of an oral film product is directly informed by its weight. It is therefore critical to control the weight of each film product that is packaged. The size to which each individual film should cut must be determined during process development to ensure the product meets its the target weight and API load. A significant advantage with this dosage form is the ease in which multiple SKUs can be produced, by simply modifying the size of the film.

Metalized polyester is a suitable primary packaging material for oral film. It is cost effective and protects the product from moisture and light. This pouch material can be child resistant and closure systems can be designed to ensure the product passes child resistant testing, while remaining user friendly for the patient. The pouches or sachets offer larger printable 2D areas which traditional drug product formats do not. This allows the manufacturer to adapt to rapidly evolving labeling and regulatory requirements for information and anti-counterfeiting, such as product serialization. Furthermore, the primary package provides sufficient space to include instructions on how to open the package and use the product, so that patients have a clear understanding of how it works.

The manufacturing of oral films is a continuous but modular process that is suitable to automation. The modularity of the process, such as master roll holds, allows for finished conversion to be done in the country or region of distribution, which compliments satellite expansion based on regional demand. The manufacturing process has a low carbon foot print, with lower use of water for component preparation and sterilization as compared with other dosage forms.

Oral film is still a nascent dosage form and many exciting new applications and advances are being explored.

Oral film is the optimal dosage form to pair with innovative precision dosing software such as BestDose(5). Lastly, the establishment of printing technologies for oral films could enable individually customized products, including fixed dose combinations and very low doses. The possibilities for this truly multi-faceted dosage form have only started to be realized.

Jessica Rousset is CURE’s Chief Operating Officer. Mrs Rousset oversees operations and drives corporate strategy and growth. She previously served as Head of Innovation at Children’s Hospital Los Angeles, where over a ten-year period, she helped launch both therapeutic and medical device companies and founded and operated a national paediatric technology accelerator. Prior to that, Mrs Rousset held positions at the Scripps Research Institute and GlaxoSmithkline Biologicals in laboratory, clinical research and business development roles. She trained as a biochemical engineer at the Institut National des Sciences Appliquées in Lyon, France.

A version of this white paper on oral thin films was published in ONdrugDelivery
Issue 88, July 2018